The Commissioner for Protection of State Language Taras Kremin met with the Ambassador Extraordinary and Plenipotentiary of the Republic of Estonia to Ukraine Mr. Kaimo Kuusk.

Taras Kremin thanked the Ambassador for arranging the meeting with Mr. Ilmar Tomusk– children’s writer, Director General of the Estonian Language Inspectorate that supervises the implementation of the Estonian language law as well as of other legal acts regulating the knowledge and use of the state language.

The Commissioner stressed the importance of establishing close cooperation with other language institutions of the country as well. In particular, those onesthat are represented in the European Federation of National Language Institutions (EFNIL) likethe Institute of the Estonian Language subordinated to the Estonian Ministry of Education and Research.

"Arrangement of cultural exchanges, support of educational reforms, assistance in scientific research, translation are those basic things that demonstrate the positive dynamics of Ukrainian-Estonian relations. One of the latest examples of that is the publication of children’s book "Friends of the Wolf" by Ilmar Tomusk at the Old Lion Publishing House translated from Estonian by Iryna Pavliuk", - TarasKremin said.

"We sincerely look forward to further close cooperation with Estonian language institutions which experience in implementing the legislation on the state language will be extremely useful in Ukraine as well", - the Commissioner added. 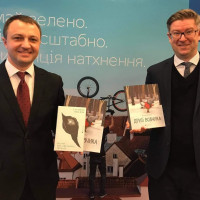 Business must be ready to comply with the national language legislation