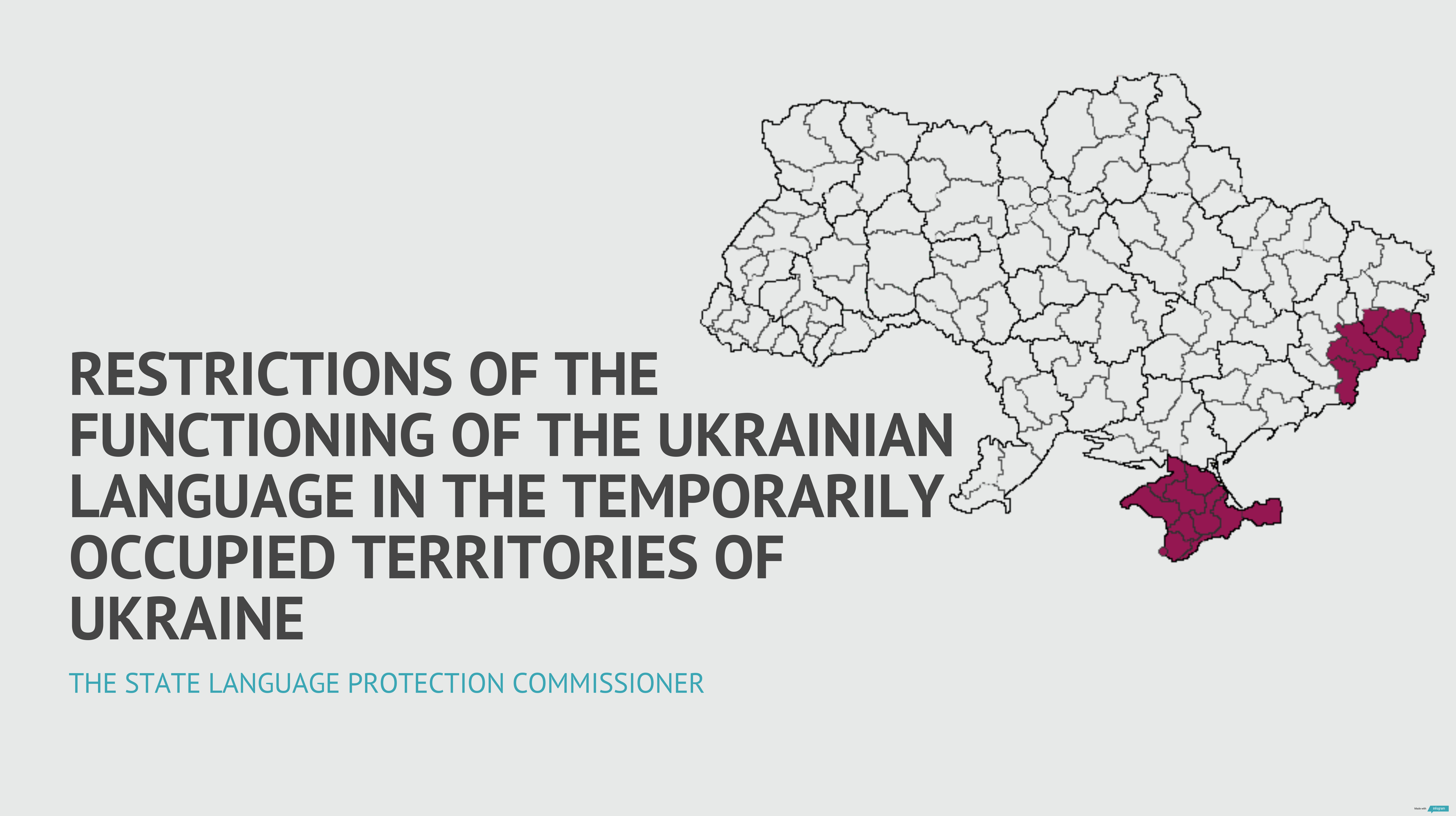 The armed aggression of the Russian Federation which led to the occupation of the Crimean Peninsula and parts of Donetsk and Luhansk regions is currently the main challenge for the Ukrainian statehood, human rights and international security in general.

The Review aims to summarize and provide available information to the wide audience about the facts and processes proving that the Russian Federation is carrying out in the occupied by it territories of Ukraine the purposeful policy of destruction of the state language in all areas of society, testifying about the actual deprivation of the right to use, to learn Ukrainian and to be taught in the Ukrainian language, discrimination and repression against persons showing their Ukrainian national identity in public, in particular by communicating in the Ukrainian language.

In the process of preparation of this Review the figures and data of the Representative of the President of Ukraine to the Autonomous Republic of Crimea, the Ministry for Reintegration of the Temporarily Occupied Territories of Ukraine, the Ukrainian Parliament Commissioner for Human Rights, the State Statistics Service of Ukraine, the Crimean Human Rights Group, state and public think tanks, human rights organizations, the publications in media, information posted on the resources of the occupation administration, testimonies of citizens of Ukraine living in the temporarily occupied territories as well as of internally displaced persons have been used.

1. FUNCTIONING OF THE STATE LANGUAGE IN THE AUTONOMOUS REPUBLIC OF CRIMEA AND THE CITY OF SEVASTOPOL BEFORE OCCUPATION 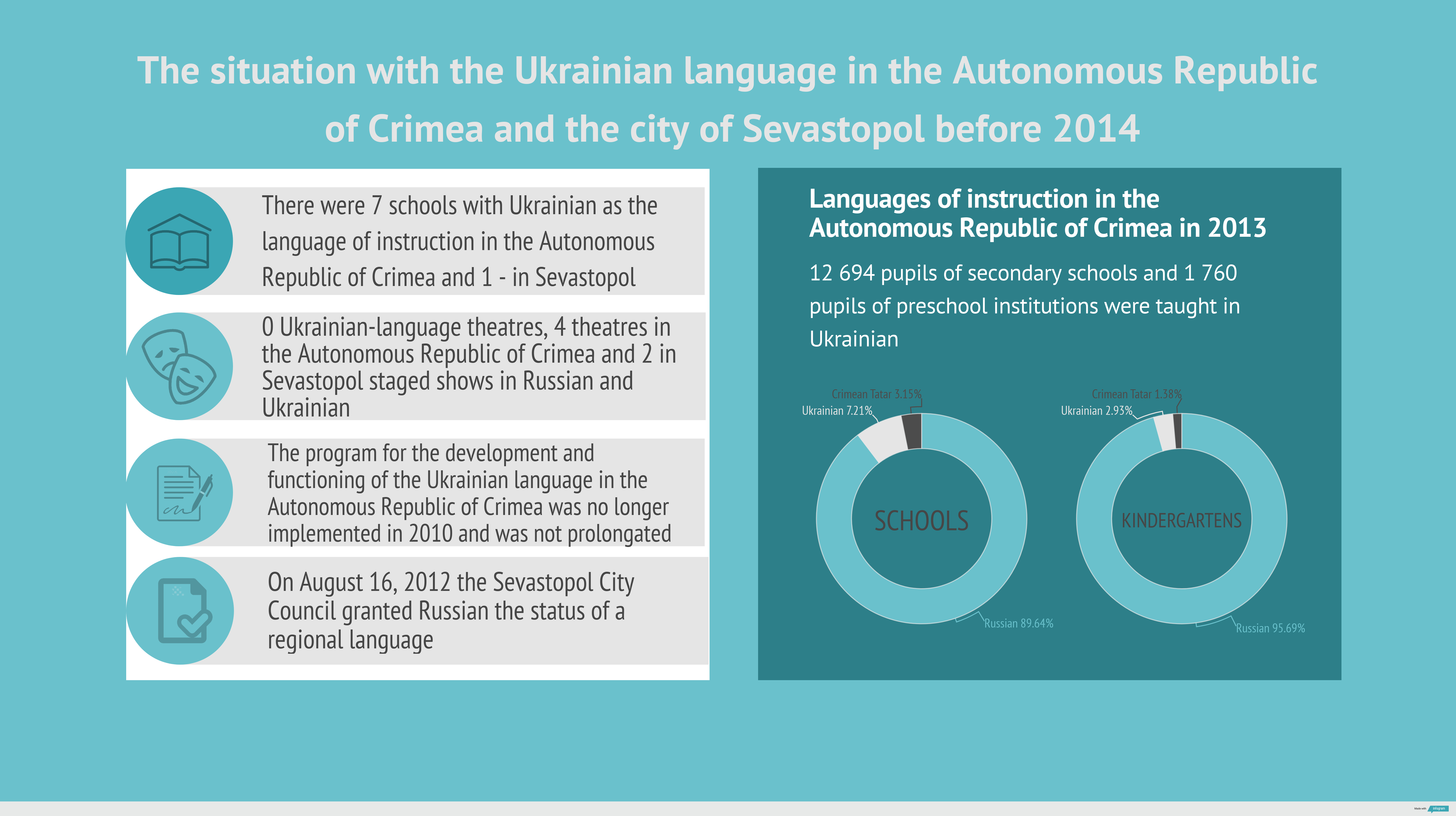 At the beginning of 2014 the Russian language was dominant in all areas of society in the Autonomous Republic of Crimea and the city of Sevastopol. The percentage of general education institutions with Ukrainian as the language of instruction did not meet the needs of those wishing to get education in the state language. In the territory of the peninsula there was no effective state policy to promote and ensure the development of the Ukrainian language. The population of the peninsula was not included in the Ukrainian state language-cultural space. Thus, the favorable ground for carrying out information and psychological operations by the Russian Federation and the occupation of Crimea was created.

2. FUNCTIONING OF THE STATE LANGUAGE IN DONETSK AND LUHANSK REGIONS BEFORE OCCUPATION 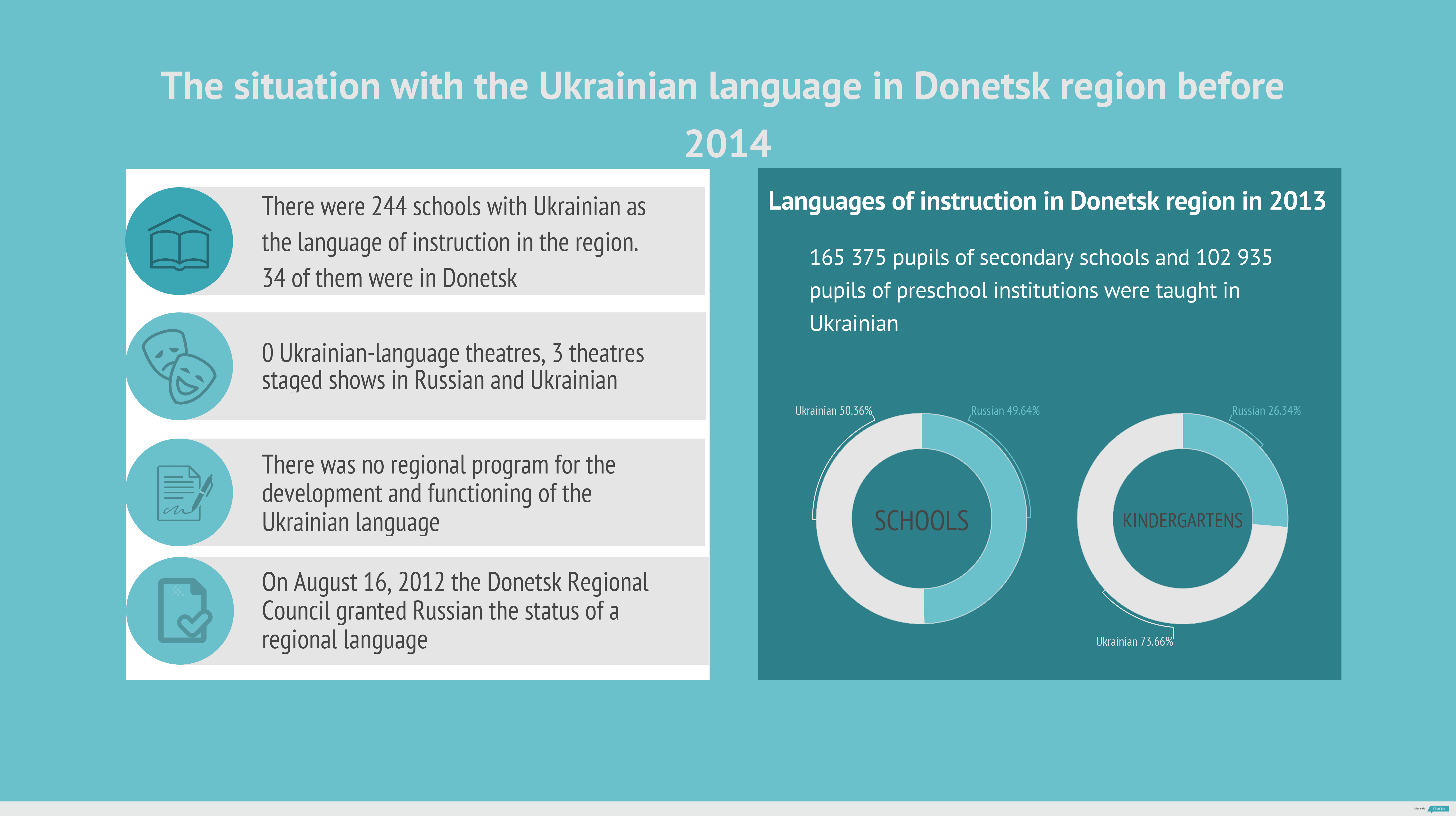 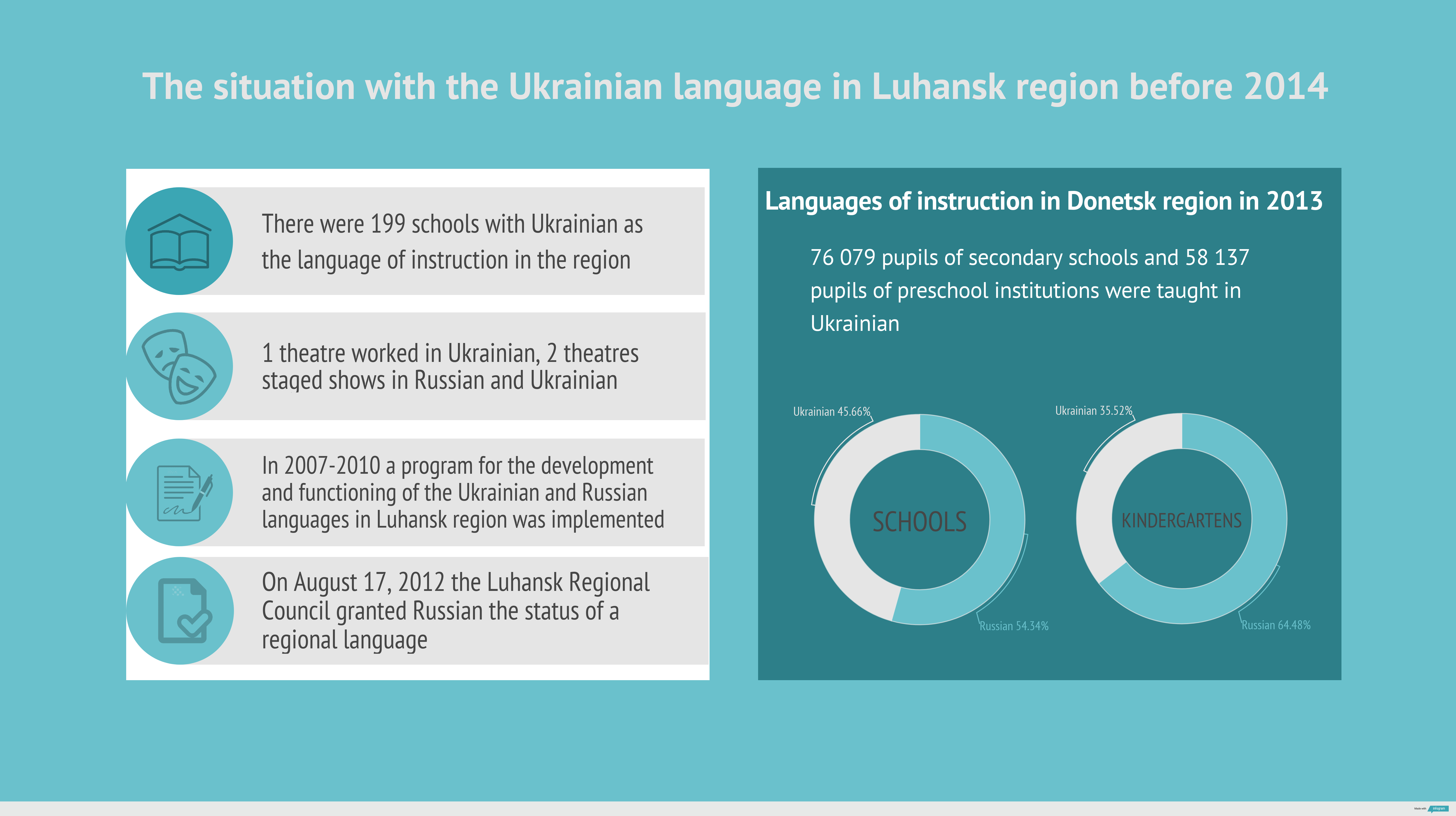 3. FUNCTIONING OF THE STATE LANGUAGE IN THE AUTONOMOUS REPUBLIC OF CRIMEA AND THE CITY OF SEVASTOPOL AFTER OCCUPATION 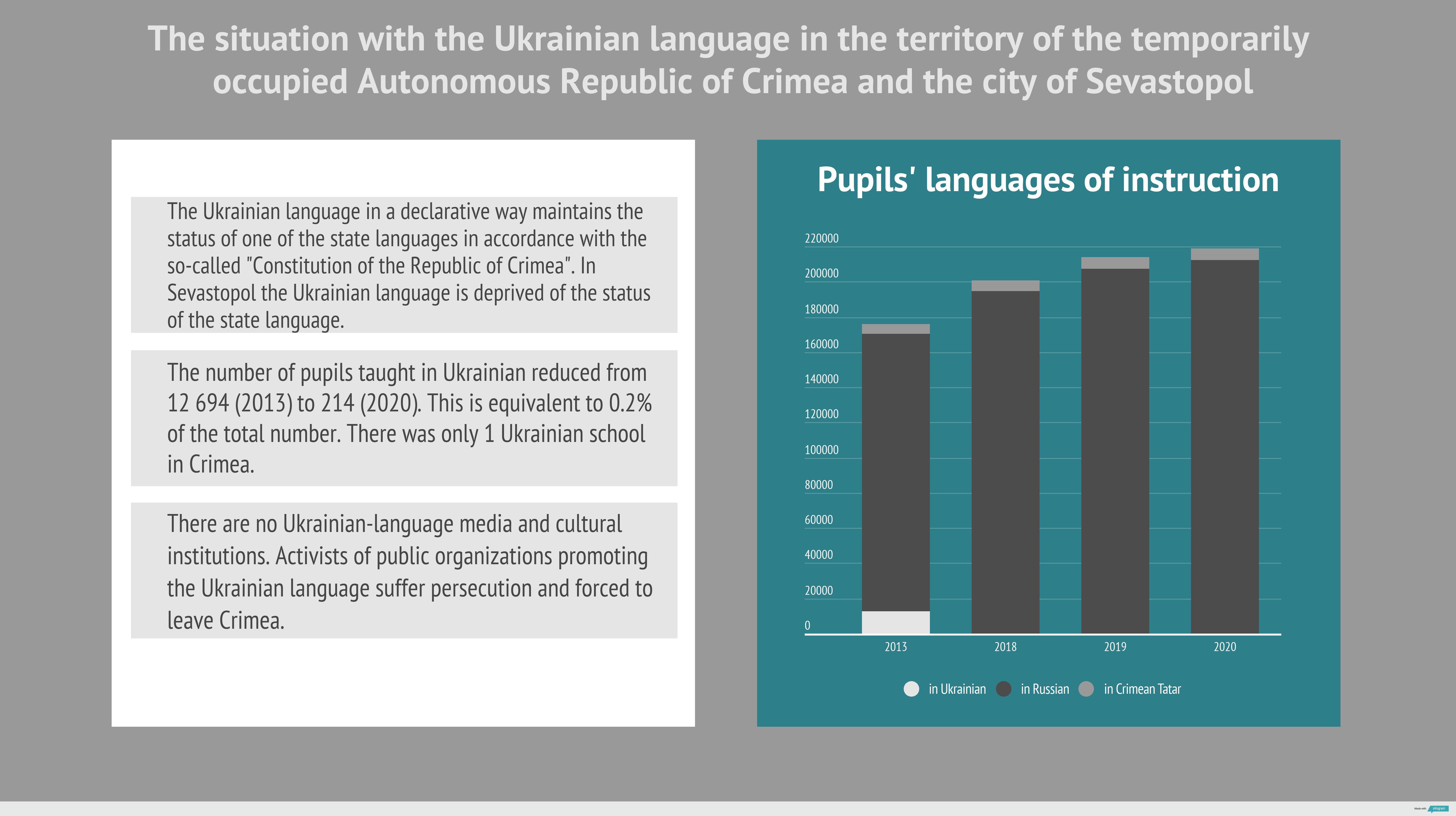 4. FUNCTIONING OF THE STATE LANGUAGE AND RESPECT FOR LANGUAGE RIGHTS OF CITIZENS IN THE TEMPORARILY OCCUPIED TERRITORIES OF DONETSK AND LUHANSK REGIONS 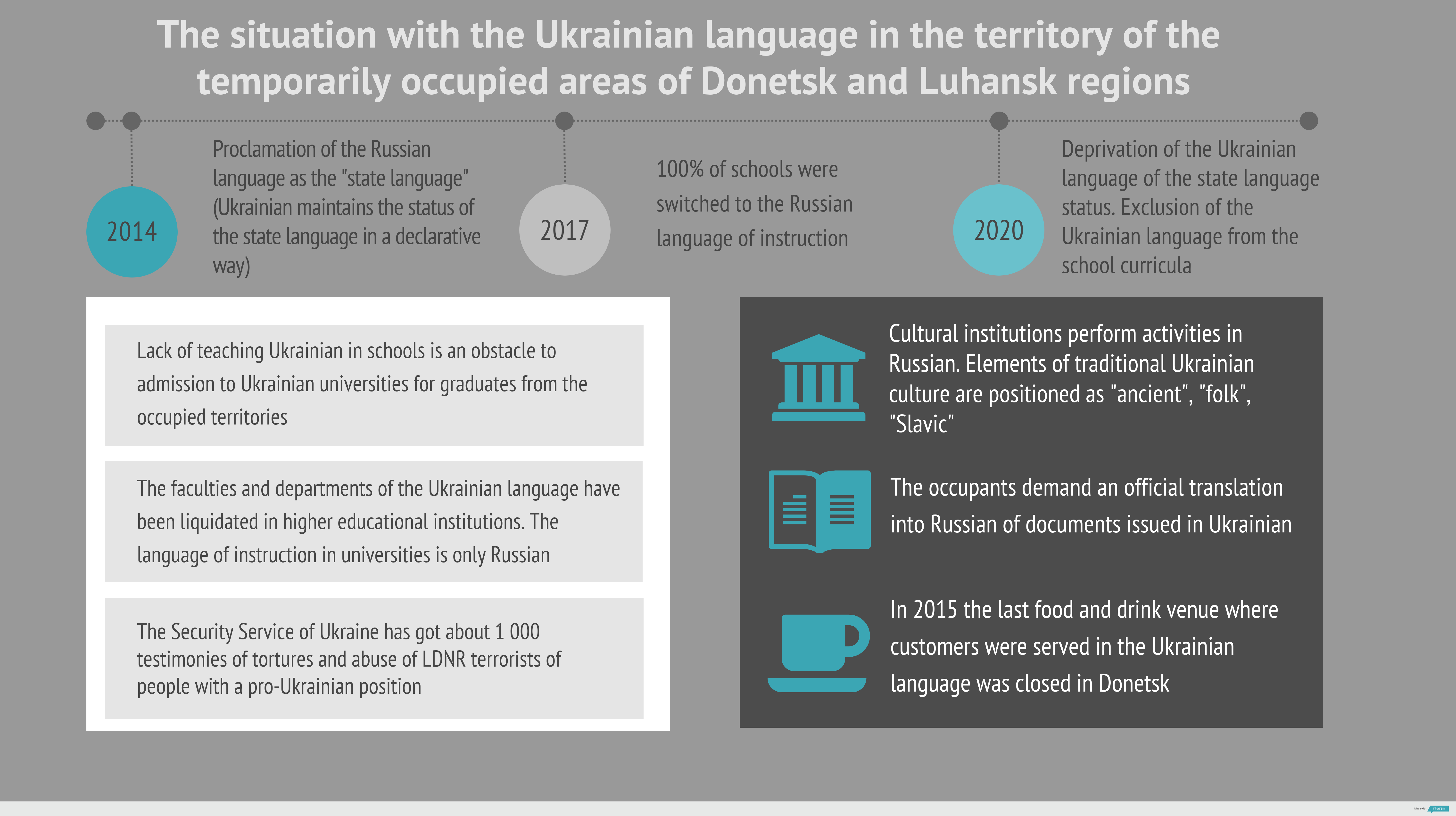 The purpose of the occupation administrations in “ORDLO” is the complete assimilation of the population of the occupied territories that is officially declared in the “Russian Donbas Doctrine”. The Ukrainian language has been pushed out of the information space, education and culture. Citizens of Ukraine living in the territory of certain districts of Donetsk and Luhansk regions have limitations in using the Ukrainian language as there is a real threat of deprivation not only of their freedom but also of their lives.

Simultaneous steps of the "republics"’ administrations in abolishing in their "constitutions" even the declarative mention of the state status of the Ukrainian language demonstrate once again that their decision-making center is in the Russian Federation. 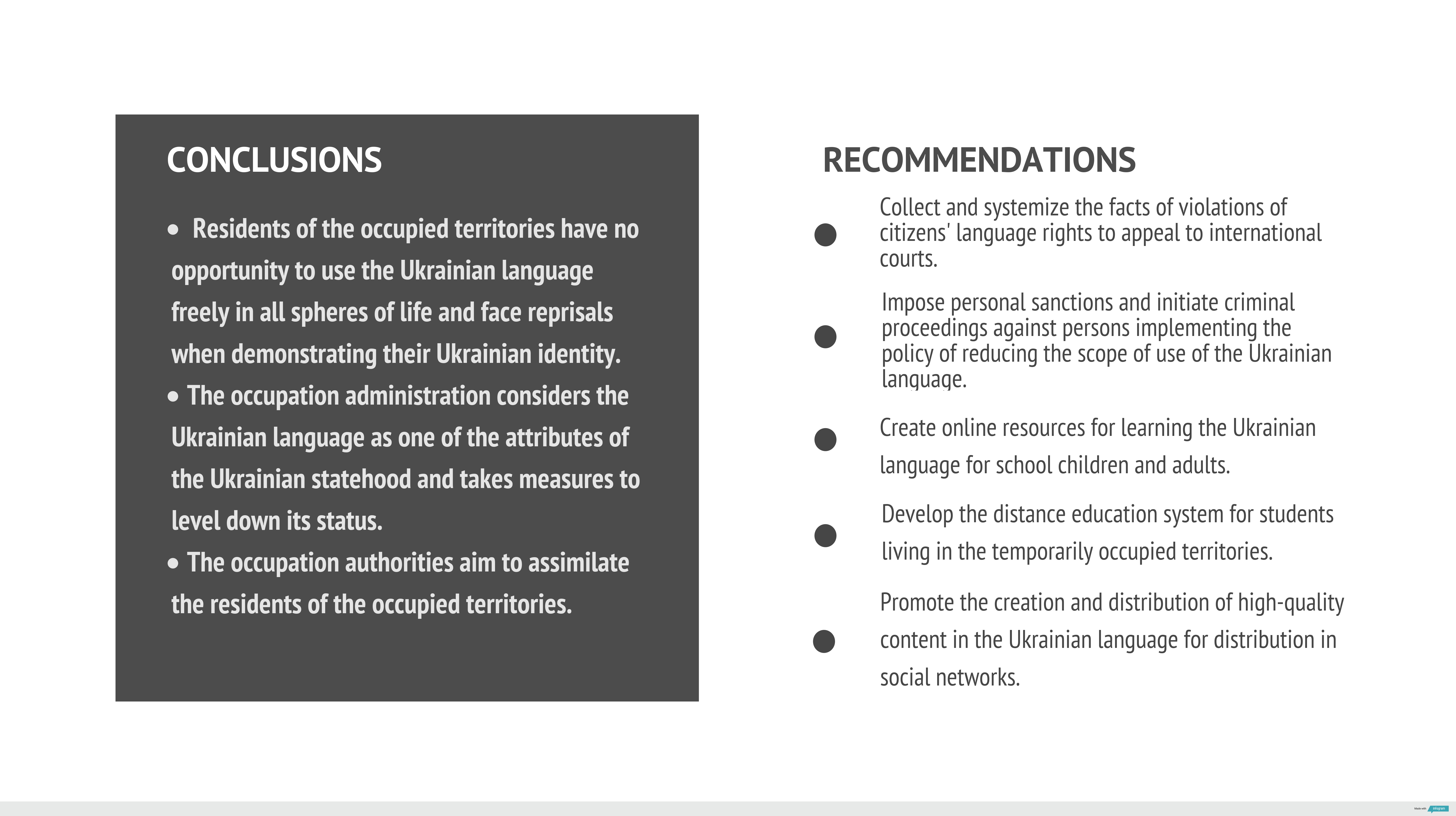 The language issue is one of the key factors of Ukraine's national security, and the actions of the occupying state to level down the status of the Ukrainian language require the effective counteraction from the Ukrainian state.

It is obvious that the temporary occupation of the Crimean Peninsula, parts of Donetsk and Luhansk regions makes it impossible in practice to implement an effective state policy on establishing and promoting the Ukrainian language in these territories. However, the Ukrainian state has got all tools to implement a balanced and integrated state policy to establish the Ukrainian language-cultural space in the territory controlled by the Government of Ukraine, as well as to prepare conducting such policy in the entire liberated territory of Ukraine.