The Commissioner presented the review of restrictions on the functioning of the state language in the temporarily occupied territories of Ukraine
posted 19 February 2021 11:39

Today, on February 19, on the occasion of the International Mother Language Day, the State Language Protection Commissioner Taras Kremin presented the review of restrictions on the functioning of the state language in the temporarily occupied territories of Ukraine. The review was prepared with the participation of the Representation of the President of Ukraine in the Autonomous Republic of Crimea, human rights and public organizations monitoring the respect for citizens’ rights in the temporarily occupied territories of Ukraine.

Tamila Tasheva, Deputy Permanent Representative of the President of Ukraine in the Autonomous Republic of Crimea; Eskender Bariiev, Chairman of the Crimean Tatar Resource Center, Head of the Department for Legal and Foreign Affairs of Mejlis of the Crimean Tatar people; Andrii Shchekun, Coordinator of the Regional Council of Ukrainians of Crimea (KRUK) and Serhii Stukanov, Head of the Analytical Department of the Center for Content Analysis, Co-coordinator of the “Space of Freedom”movement also took part in the press conference “The Situation of the State and Crimean Tatar Languages in the Temporarily Occupied Territories of Ukraine”.

“This review is one of the first fundamental attempts to give a clear and vivid description of how the rights of Ukrainian citizens in the occupied territories are violated in terms of prohibiting and persecuting because of the Ukrainian language”, – Taras Kremin said at a press conference.

“The lack of a systematic and integral state language policy laid the groundwork for Russia’s aggression against Ukraine. The occupation administration is taking measures to level down the legal status of the Ukrainian language and assimilate the population where education is one of the main tools”, – he said.

The State Language Protection Commissioner stressed that the language issue is one of the key factors of Ukraine’s national security, and the occupying state’s actions to level down the status of the Ukrainian language call for effective counteraction on a part of the Ukrainian state.

Among the measures of such counteraction he mentioned the following ones:

• collection and systematization of information on the facts of violation of the language rights of Ukrainian citizens in the occupied territories for appeals to international organizations and claims to international courts;

• imposition of sanctions and initiation of criminal cases against persons who implement the occupying state’s policy to reduce the range of use of the Ukrainian language;

• ensuring the Ukrainian radio and TV broad casting in the temporarily occupied territories;

• ensuring the creation of online resources for learning the Ukrainian language for schoolchildren and adults in the occupied territories;

•promoting the creation and distribution of high-quality information, entertaining and educational content in the Ukrainian language on social networks for the purpose of distribution in the temporarily occupied territories, etc.

Taras Kremin emphasized the need to consolidate efforts and use all possible tools of international diplomacy to release hostages held by the occupation administrations as well as to apply sanctions against Russia for human rights violations.

The Commissioner also thanked “teachers and children who, in spite of the criminal conditions in the occupied territories, are trying to receive and provide education remotely and seek to study at Ukrainian universities”.“Due to such programs as “Donbas-Ukraine” and “Crimea-Ukraine” they come to the territory controlled by the Ukrainian government and get into Ukrainian universities. For sure, it’s necessary today much more attention to this because this is an issue of entrance examinations,of the creation of proper conditions in dormitories,of the necessary scholarship provision, of the protection of their relatives accompanying them – this is one of the key issues facing the Ukrainian authorities in terms of the issue of reintegration of human capital”, – he said.

You can read the full text of the review here. 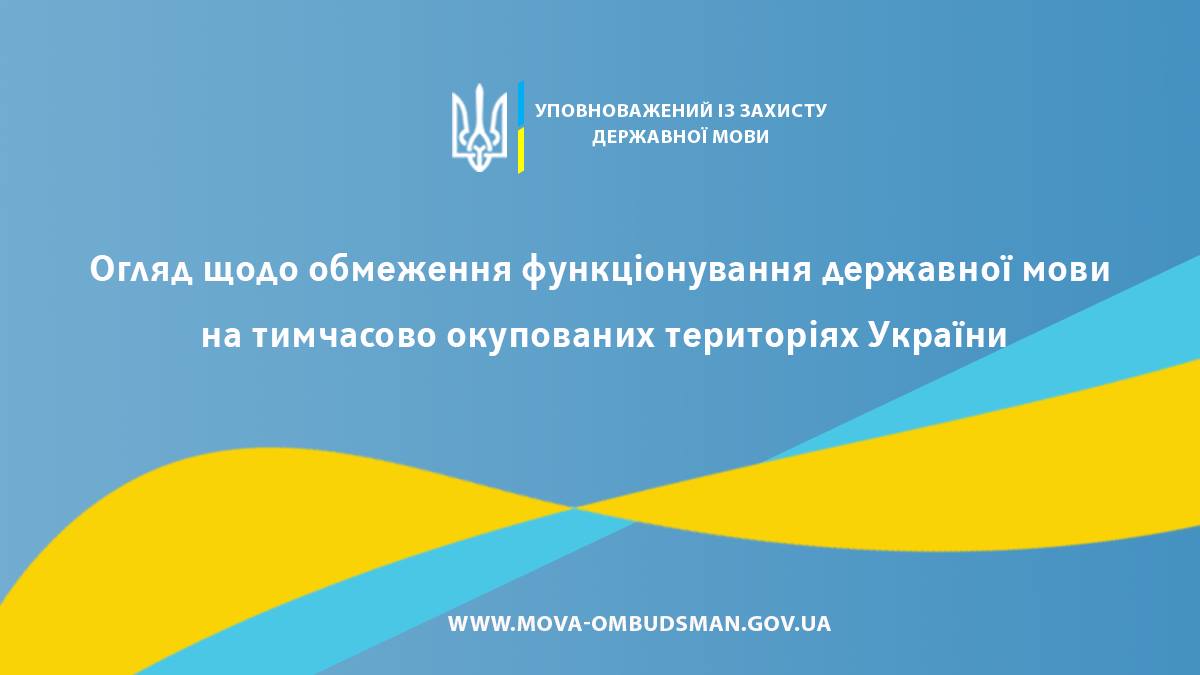